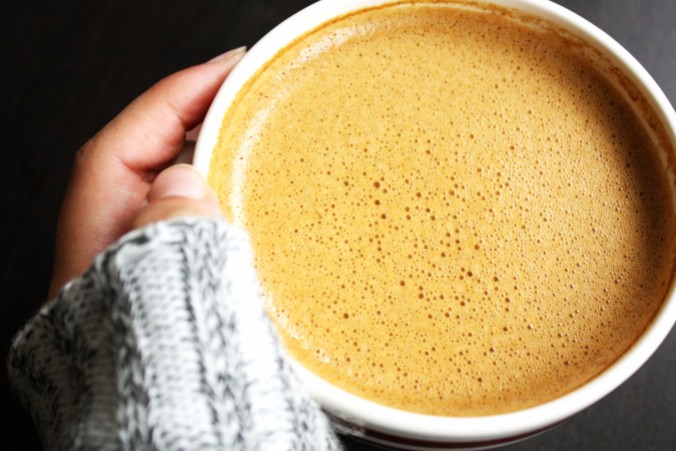 So I know I’ve said I’m not a fan of the ever popular PSL, but I’m retracting that statement because I figured out how to make a yummy, homemade version that doesn’t make me feel like a 5-year-old after eating an entire stash of Halloween candy. Sayonara, Starbucks.

The best part about this drink, is that you don’t even need an espresso maker to do it! All you need is a blender. And a coffee maker. But just a regular coffee maker. It’s not as sweet as Starbucks’ version—which is why I like it—but it still has all those warm, fall pumpkin spice flavors.

I experimented with a couple different methods, which turned out very similar, but this one produced the best consistency. At the bottom of the page, I’ll explain my alternative method in case you’d like to try it.

The only difference is mixing the spices into the actual coffee grounds before brewing the coffee, rather than tossing them in the blender at the end. I found with the latter, it made the drink somewhat gritty, whereas the former gave off the flavor of the spices without the gritty texture.

I actually saw pumpkin pie spice extract at the store, which would be even more ideal for this recipe as it’s a liquid, and you could keep adding more if the flavor didn’t stand out enough. Don’t be afraid to experiment and find what works best for you!

Start by brewing the espresso, which is basically just concentrated coffee. You can make it with your regular coffee maker by doubling the amount of coffee grounds you would normally use.

Stir the pumpkin pie spice into the grounds before brewing. While the coffee is brewing, heat up the milk on the stove or in the microwave until hot, but not boiling.

In a blender mix all ingredients and blend on a high speed until super frothy.

**For a richer flavor, you use whole milk or half and half. And to make it sweeter, add more sugar.

Welcome to Ditch the Recipe! I'm Lauren and I'm here to help home cooks like YOU get creative, boost your confidence, and have more fun in the kitchen. All my recipes are easy to make and easy to alter, so you can get creative and make them your own. Let's get cooking!

What are you craving?